By the time I reached the point where our neighborhood rain water canal drains into Kranji reservoir I had some interesting moments with a White-bellied Sea Eagle, a Collared Kingfisher and a Common Iora who seemed to be unusually itched by something for he was so busy scratching himself that he wasn’t alarmed at all by my presence hardly 20ft. away.  I am not going to share those encounters here as I want to share something else that excited me more today.

So, when I reached the meeting point of the canal and the reservoir and looked back I saw this cute Zebra dove perched on the canal-side railings and looking away from me. I also saw a jogger coming along the path I just came by. I am not sure if the dove at this moment was aware either of the jogger or me.

I am not known, nor will I ever be, for my IQ or quick reflexes but today, thanks to this flying Zebra my hopes of possessing some IQ revived. How?  Just read on.

My IQ, – no no, I would rather call it my wild instinct, told me the dove will take off as soon as it noticed the jogger coming towards it and it should present me a chance to snap a shot or two of the flying bird with its take-off wingspread frozen in time. Now, I think I got more than that. 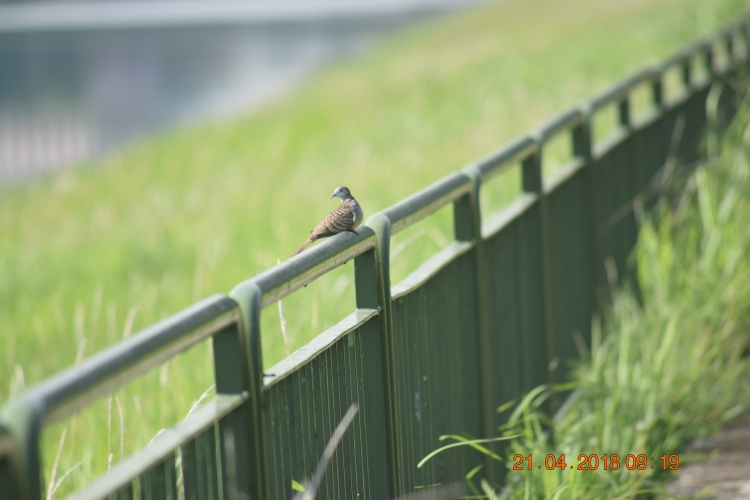 There was less than half-a-minute before the dove could get alarmed enough to fly off. And it will be a fraction of a second before the bird gets out of my D5600’s field of vision with its Sigma 70-300 tele-lens in full zoom. Please don’t take me to be a camera expert looking at my language. I am not. I hardly know more than aim, zoom and shoot although its more than a year since I acquired a D5600. (Now you know the reason why I prefer the phrase wild-instinct to IQ when it comes to my reflexes😆). I got to be quick enough to make my dream shot. I randomly reduced the zoom to give the camera some extra seconds to capture the bird in the way I wanted to. I just waited with my finger on the trigger. At the back of the mind there was an uneasy feeling that the jogger might think that I was covering him in the picture. But there was no time for thinking any more, see👇the dove had already become alert to the presence of humans on either side.

It turned its head twice, possibly to assess the best direction to make its escape. At the same time I too adjusted my position so that the jogger would not enter my picture. By the time he disturbed the bird he probably knew I was not out to make a documentary of his athletic pastime but most probably did not realize the fact that I was using him to trigger my dream snap. Everything went well. The zebra took off and was in no time over the canal👇 making it to safety from the double jeopardy that it could have felt it was in. I did not count how many snaps I made and was not sure if the critical moment was captured or not.

I was in for a pleasant surprise back at home while viewing the pictures on laptop. My wild instinct worked, though half-a-second’s delay could have sent the bird out of the frame. The picture captured not just the wingspread but also the quick maneuver it made, its expression while making an in-flight decision and the multiple hues of a Zebra dove’s underside. 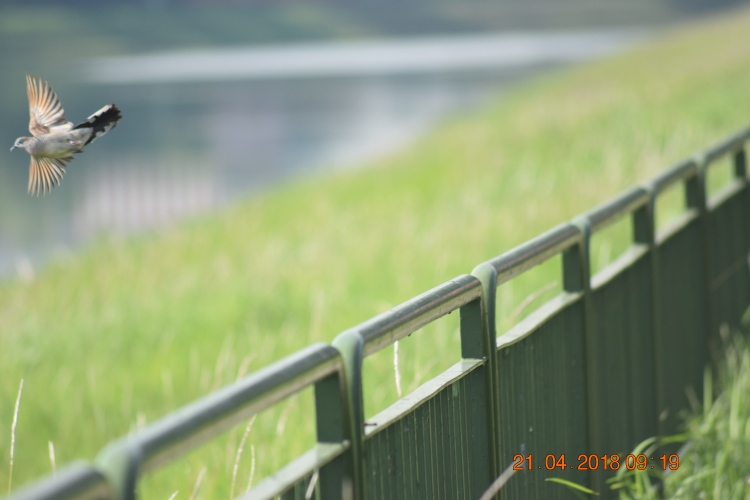 Let me elaborate a little.

The dove had to make a quick maneuver after taking off because it probably thought of taking off straight ahead and realized rather late that there were trees blocking its flight path (see first pic with jogger). So, it had to turn right and back as soon as it took off to fly over the canal.

The expression in its blue-hued eye seemed to disclose, to me at least, a momentary panic of a micro-second maneuver and an immediate relief of finding a safe way out.

Zebra dove gets its name probably from the zebra-stripes-like patterns its feathers give its exposed back. Other than the brown and white of zebra stripes, only other color one can see is aqua-blue, the color surrounding its eyes. But this, my dream shot, reveals to me all different hues the zebra is painted with. Copper-like shine under the wings, grey on the wing tips, a distinct, black V on the under side of the tail, aqua-blue of the eye-patch, slightly pinkish feet and of course a sprinkling of the zebra pattern mingled with the whitish-grey of the belly. 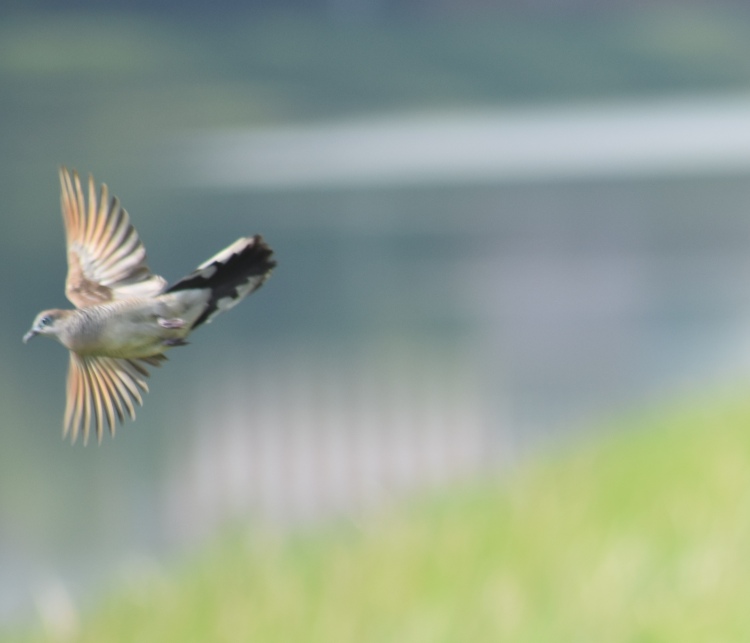 This innocent, cute bird together with that unknowing jogger has today gave me one of the best pictures I have ever taken in my less-than-a year’s journey with bird photography.