When I saw the big bird flying in a direction opposite to mine but straight above the track I was walking on, I was not sure if it was a juvenile White-bellied sea eagle or a Brahminy kite. Birds of both these species are regularly seen around the flood water canal area which also happens to be my weekend Bird Walk (Bird watching + Morning Walk) circuit. In the early morning twilight the colors and feather markings were not clearly visible to determine the species but as the bird got closer I felt it must be a juvenile White-bellied Sea Eagle. I started clicking my camera as the bird passed overhead with wings flapping heavily, another sign of an eagle. ( 👇 Pic. 1, 2, 3, 4 👇) The bird flew northwards, into the reddening skies. I was about to turn back and continue walking southward, when I realized my juvenile sea-eagle was being chased by an adult sea-eagle (it looked bigger) and within seconds they were overhead of me and to my right straight above the canal. Just as I clicked my camera to capture their aerial acrobatics I saw something dropping from the talons of the smaller eagle and the bigger one approaching that “something.” Obviously I failed to notice the “something” while photographing the juvenile when it passed above me previously. I hardly had the time to witness the acrobatics as I let my lens watch the aerial drama while I kept my focus on clicking the camera. (👇 Pic. 5, 6 👇) The adult eagle with its “daily-bread”, it must be a fish, won or rather grabbed from the poor juvenile proceeded west to enjoy whatever was the catch in a lightly wooded part adjacent to the reservoir into which the flood water canal, mentioned before, drains. (👇 Pic. 7👇) In my eagerness to follow the winner (or the bully?), I lost track of the poor juvenile. Hope, by now (s)he would have her/his daily-fish. I reached home wondering when and from which corner the adult eagle approached as I could not recall seeing another bird in the scene. Taking a closer look at pic.4 I spotted a black speck (circled) which I now think was the adult bird flying eastwards noticed the juvenile with its prize catch and immediately took to chasing it. Both the birds must be unaware of each other until their flight paths crossed. At least, I suppose so. The story doesn’t end here. That’s because I noticed something else in the first three pictures. Something about the juvenile seemed not to match with White-bellied Sea eagle that I thought it to be. What is it? Its beak looked somewhat un-eagle-like. Smaller, Shorter and resembled a kite’s beak more than that of an eagle. Could that be an Osprey? Changing the picture’s Brightness/Contrast settings and a visit to Wikipedia confirmed that my “juvenile” White-bellied Sea Eagle was actually a non-breeding visitor to this part of the globe, an Osprey (Pandion Haliaetus). It must be from Europe as North American birds, I understand, winter in South America. (👇 Pic. 8 👇) 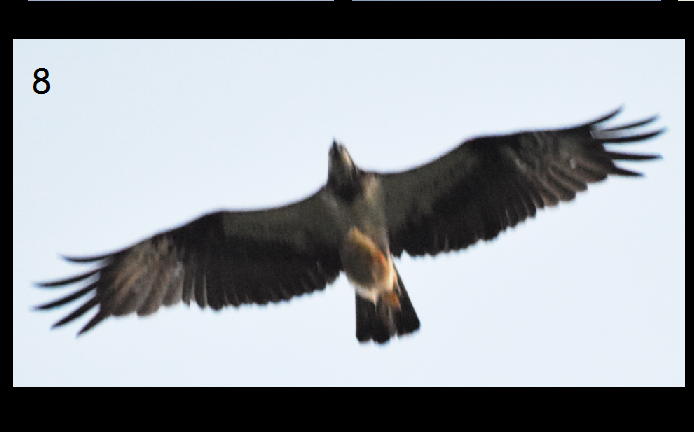 And, this is how I shared the aerial drama with my Whatsapp groups –

Witnessed an aerial drama this morning while bird-wa(lk/tch)ing.

It happened during my morning walk today. Only later i realized these are not birds of same feather😀.

A closer look at the pics revealed that the fish-dropper is an Osprey, a winter visitor from Europe. (American ones winter in South America). No surprise, the non-local guy was bullied by the local Sea eagle, resident of South Asia n Australia. Politics 😊

Bye4Now🙏 & know that this post is dedicated to all the Nature Lovers and Protectors of Wild Life. Thank you & C.U. again 😊